There is not much to report about our final two days in Holland. We got an afternoon train in Osnabruck and arrived at Amsterdam Centraal at about 5 pm. Then we crossed the canal and walked the path we’d bicycled on almost three weeks earlier back to the Weeda’s home, where we ended the first leg of our trip.

Another wet day in Holland!

Mr. Weeda had some free time so he took us for a drive while it was still light. The countryside across the canal and in the northern limits of Amsterdam is beautiful, mostly farmland dotted with small towns and age-old churches in bucolic settings. Weeda was a bit of an F-1 wannabee along the narrow roads up here, and Keenan got carsick and had to get out and get some fresh air, in the rain along a path that bordered a north-sea lagoon.

When we got home, Mrs. Weeda had a great goulash ready for us, and some choice Dutch beer.

Thank you Weeda’s for two great, “last nights” in Holland.

Well, that’s it. The next day was rainy again. We had another great breakfast at the Weeda’s, and off we went, back through the park (and among the schoolchildren on bicycles) to the little ferry, over to Amsterdam Centraal.

At a station supermarket, I picked up some blocks of Gouda and Edam to stuff in our bags, thus avoiding the 3x mark-up at the airport.

After our short hop to Helsinki, we got lucky and were bumped up to business on an overbooked flight. My air-travel suggestion, when traveling together: don’t reserve your seat when you have a connecting flight and just wait and see where the airline puts you. Here’s my unconfirmed theory- if they can’t sit you together in economy, or economy fills up before they find you seats, you might get bumped to business.  The downside, which will break the deal for most of you, is that you also might get unlucky and end up in two middle row seats, stuck between the overweight sumo wrestler on one side and the hacking, sneezing, tubercular wretch on the other.

These seat were the adjustable bed/entertainent center units I’d always peeked at getting on planes but never experienced for myself. If you told me it was first class I would have said of course it is.

Keenan was in hog-fanta heaven- it was a 10 hour movie fest.

When we arrived in Nagoya we picked up the car in the long term lot and drove right over to the Costco across the bay. I picked up a couple pairs of 19 dollar slacks for work, a couple bags of Belgian chocolate for gifts, and we wolfed on American food- greasy pepperoni pizza and big hot dogs- ahh, back in Japan!

Hope you enjoyed the blog!

Germany would get short shrift on this trip- about a day. Mostly, it was just the country we had to go through to get back to Amsterdam. Our route was like this: St. Margrethen, Switzerland; Bregenz, Austria; Lindau, Germany; Hannover; Osnabruck; Amsterdam.

First stop, Bregenz, on the lake. Across from the train station is the famous Bregenz Opera, with the floating stage. Lower right is the set up for the Magic Flute, which I saw with Una the year before. Keenan was furious that I didn’t take him to this year’s production of Turandot. 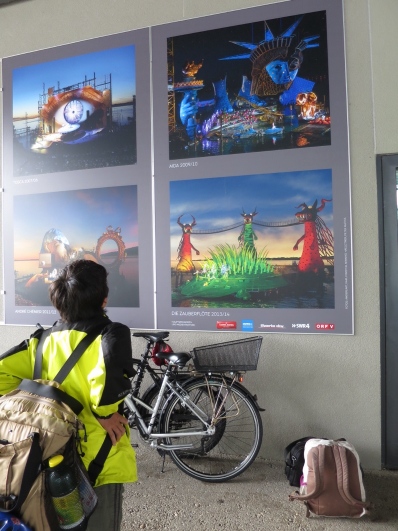 The stage for Turandot. 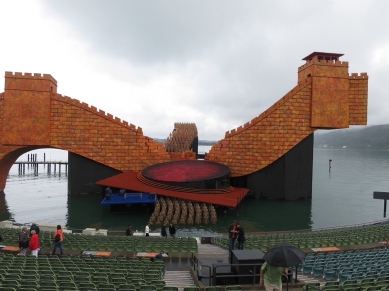 Lindau is only a 10 minute train ride from Bregenz. Here’s Lindau Harbor. That’s the boat coming in from Bregenz, or somewhere else on the lake, like Rorschach, Switzerland, or Konstanz, Germany. 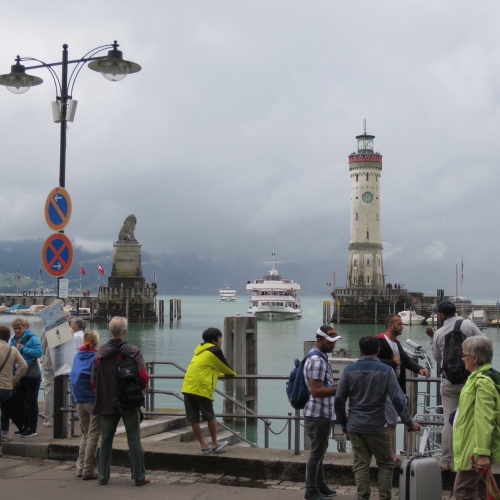 The guy on the right is thinking, “First mate, first-schmate. When is old Hoerst gonna retire so I can captain this ship?”

But Hoerst is thinking, “Captain Schmaptain. I should have taken the job with the Stena Line out of Bremerhaven. Maybe I wouldn’t be captain, but I’d be sailing the high seas!” 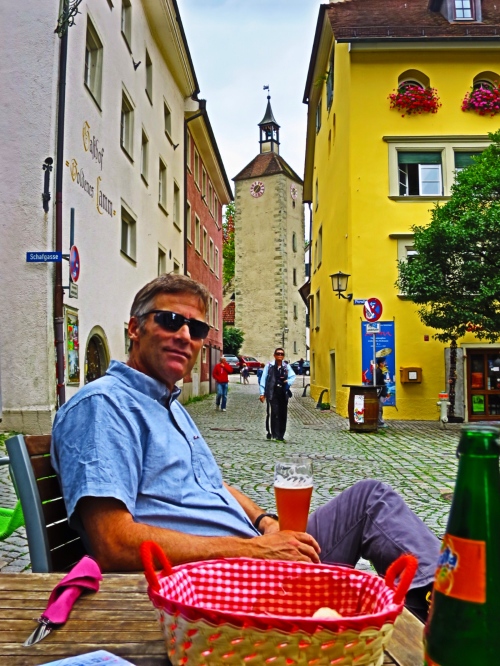 The cheapest option in getting back to Amsterdam would have been flying, but if you buy your tickets three months in advance, you can get great deals on trains. For about 80 Euros for the two of us, we got overnight tickets all the way to Amsterdam, much of the way in first class.

First leg was Lindau to Ulm, then change to a train to Hannover. We arrived late in Hannover and missed our connection, so with about an hour and a half to kill, we walked the early morning empty streets.

Here is the 15th century Marktkirche in Hannover. It looked ominous in the dim, early-morning light.

Note the hexagram and pentagram, upside-down, no less! (If there are any Rosicrucians among readers of this blog, please explain.)

Our next leg took us to Osnabruck. We could have taken the train straight through to Amsterdam, but I wanted to get a full 24 hours in Germany, and trains left Osnabruck, an important crossroad of main rail lines, all the time.

Osnabuck is near the scene of the battle of the Teutoburg Forest, where general Varus and his three legions were routed by the Germans. It’s also where half of the Peace of Westphalia was achieved, ending the thirty years’ war, with the Treaty of Osnabruck. France, Spain, and other catholic participants were based in Muenster, while Sweden and her protestant allies were here in Os.

Keenan in contemplation, in the cloisters. 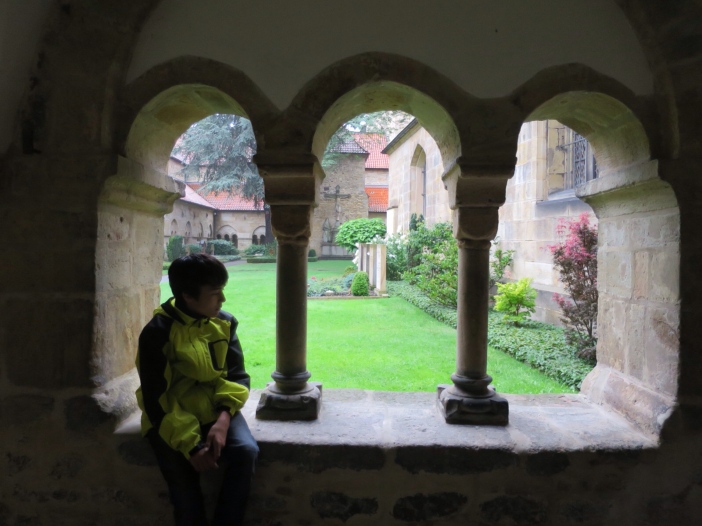 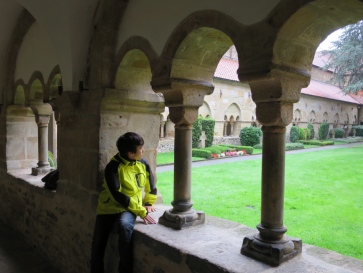 The big church on the right was light and airy on the inside. An organist was practicing on the pipe organ, and K and I sat for a good 20 minutes as the Bach was blasting.

Maximilian the First, Holy Roman Emperor, patron of the arts, and grandfather of Charles 5th(1st), King of Spain and about half of Europe during Spain’s kickin ass/takin names years. 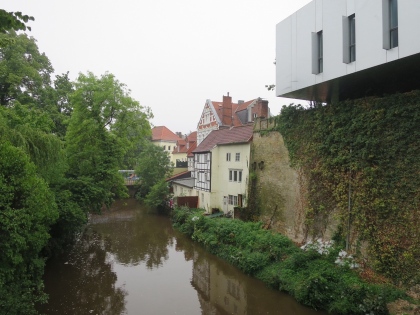 Osnabruck was a very pleasant town, even on this drab day. We would like to return!

Next- the end of our trip

After Buchs we grabbed a local train and took a 20 minute ride further down the Rhine to our last stop in Switzerland, at St. Margrethen. Our hosts were Tanja and Alex and their beautiful three children. Una and I were guests here on the ’14 trip, and it was great to see them again. We arrived around lunch time and left our bags, and walked to a very cool nearby attraction, The Fortress Museum Heldsberg.

In 1940 the Swiss started worrying about a potential attack from Germany and Italy so they built some very sturdy underground forts along thier border. This one was constructed between 1940 and 1942 and overlooked Lake Constance and was within easy shelling distance of Bregenz, Austria and Lindau, Germany. Both towns are at lake level so from this height and armored, underground protection those cities would be laid waste if the Nazis made a move on Switzerland (although it seems nobody is arguing the Germans couldn’t have taken Switzerland, because of places like Heldsberg, it would have come at too high a cost).

From Wikipedia: The German plan for a Swiss invasion, Operation Tannenbaum, noted the presence of the Heldsberg position and concluded:

“A very desirable approach is to attack from the east at Rheineck, the shortest way to the enemy flank, but the mountainous terrain and the strong fortifications at Rheineck (Heldsberg) promise no success.”[1]

I left my battery in the charger that day! so no photos from the exhibits. Everything in the fort was in its original state, including the generators that still worked and could provide ventilation for the entire, vast network of passages and rooms. There were sleeping quarters, a mess hall, a sick bay with operation room, air-lock chemical warfare disinfectant chambers, ammo room, weapons room, command center, and gun batteries all over the place (with the original cannons and scopes you could look through  and train in on enemy targets, like the tourist boats crossing Lake Constance.) In one room they had a special, detailed exhibit about the AK-47. It appeared ol’ Kalishnikov himself had visited the fortress, sometime in the 90s. It looked like he was treated as a real big shot when he came to town.

It was fascinating and we stayed all afternoon.

At one point we were in the communication room. On the wall were maps and posters that detailed the plans for the axis invasion of Switzerland. In a display case were various samples of Nazi propaganda. There was a copy of Mein Kampf. The display said that during the war, you could find a copy of Mein Kampf anywhere in Germany. It was given by the regime to all newlyweds. It also said that the particular German version on display was very rare, as 1) Germans were quick to destroy their copies before the invading allied armies arrived, and 2) Mein Kampf was banned after the war and is still a banned book in Germany today.

I told Keenan about all this.

“But what about here in Switzerland? Can they read it here?”

A Swiss man was listening in and he piped up, “Yes, you can read that book here. We are like America, not Germany. Books are not banned!”

On that note our tour ended and we had to get back to Alex and Tanja’s house, for they had invited us for a Swiss Raclette dinner.

After dinner, fun in the basement. What a kick A & T’s kids are!