I felt sorry for the old Hotel Rustichello.  It had real, rustic charm, just like the town of Lonato. Take this doorknob, for instance:

But for attracting tourists, they were both in a tough postition; too close and too far from Lake Garda. It would work as a motel out on the lonesome highway somewhere, but this close to the lake you could just drive another mile or two and stay somewhere within walking distance of a nice dip. That explained the good deal we got.

Travel Tip: I kept getting the wrong coffee in Italy. I ordered “Cafe normal” and got espresso. The big one with the hot milk is an ‘Americano’, presumably for us Americans, who go for quantity.

The air in the back smelled just like SoCal.

The owner gave me a couple pamphlets advertising the local museum, and he grumbled about the opening hours, and grumbled some more about the municipality’s lack of dedication to tourist infrastructure. It was killing business.

I said we were interested in seeing pretty, little Lonato, and could we leave our bags here at the desk for a while?

“Oh. We’re closing. You’ll have to take your bags.”

-Well, then I guess we’ll just be on our way. You said the bus to Verona picks up across the street?

It was already hot as we left the motel, and the bus stop had no shade. I figured we’d be all sweaty by the time the bus arrived. But the owner came out to open the back gate and let us sit in the shade. Time for K to get a little homework done. 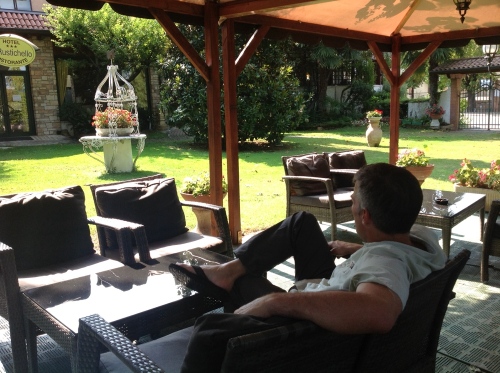 I get it, you don’t need the parking space, but why advertise that? 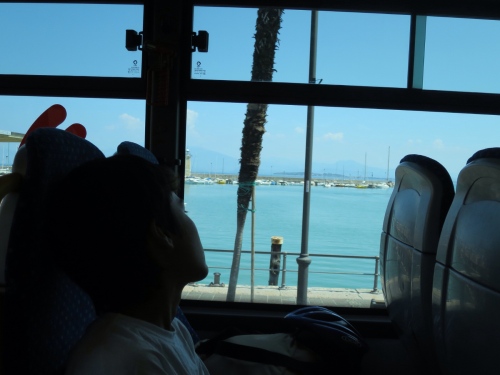 The road hugged the south end of the lake. A German friend told me Lake Garda is his top choice for a vacation. If we come back, it will be at the northern, mountain end. Down here feels a little too, I don’t know… Waikiki, Corona del Mar, Orlando?  Fine places but I want a little Italy thrown into my Italian vacation, not Ruth’s Chris steak house. I’m sure Clooney agrees with me on this. His chalet must be at the more rustic, mountainous end.

We arrived around noon in Verona. I expected some sort of depot but the bus driver just looked back and motioned for us all to get out, end of the line. An Irish family got off at the same time. I asked the father if he knew where the heck we were. He gave a hearty laugh. “Ha! Your guess is as good as mine!”

I left K in a park and searched for a wifi signal. Grabbed K and went in a Burger King but we couldn’t hook in. Plus the girl was one of those scowling, “Why am I here flipping burgers at BK?” types. so we made for the door and found this cool little family owned cafe with wifi, a friendly cashier and pretty good food. Here K eats a quesadilla with some Italian name, pizzapannola or something.  And if that doesn’t fill him up, he can douse that bread in olive oil and balsamico to his heart’s content.

Hey, what’s that in the upper right?

No more, “Would you like a Peroni or a Budweiser?” Italy has it all. And they’ve got a big microbrew scene.

This friendly place was a good start. Verona felt just my speed after bustling Milan and ghost town Lonato. We found a deal and checked the map- only a five minute walk from here.

Here’s the view out the window of our place, only a block from the Roman arena, right in the heart of Verona. 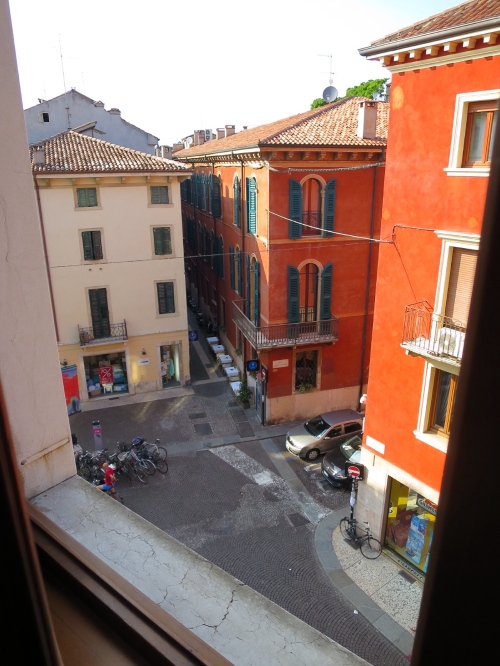 We dumped the bags, showered and headed out to see the town.

They run open-air operas all summer long in the big arena. Every night they change shows so they keep the props out on the square.

From the set to I, Caligula. 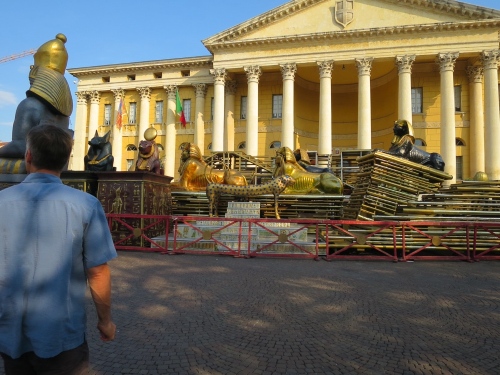 “rock bathed in the blood of saints Firmus and Rusticus” (early Christians who refused to worship pagan gods and got the treatment from Emperor Maximian. Bum luck because Constantine was only a few years down the pike.)

No sympathy for the Bolsheviks around here, I guess.

Here’s how to dine al fresco in Italy. VIPs sit by the river. The rest of you, in the alley.

This view brought to you by Banca Populare di Verona 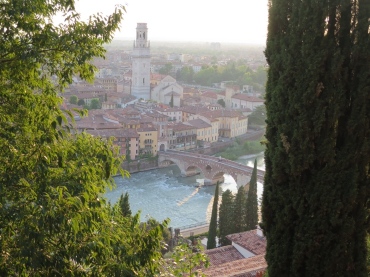 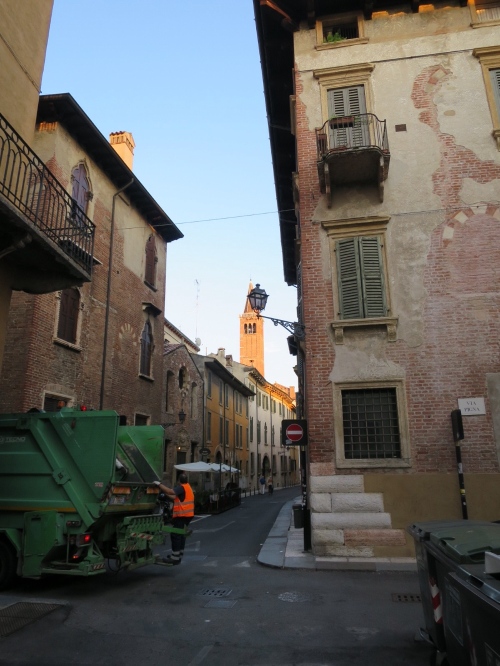 You wouldn’t believe how long it took me to photoshop the truck, sign and garbage bin out of this otherwise perfect picture.

Everything but Italian for the heretics.

Language Tip: In Italian, you have to know what to do with double consonants, and how to pronounce the c, the cc, ch, etc. You also have to know what syllable within a word should be stressed. Here’s a good example. Listen to the correct pronunciation of this sign.

I heartily recommend Verona if you haven’t been there. It’s a very romantic town. I’ve already told my daughter that I’ll chip in for the honeymoon if it’s in Verona, and I can come along.

Perhaps the feel of Verona is best captured at night.

Next: Verona at night, without irritating commentary